The following article is a re-post of Catholic schools look ahead with innovation but also focus on tradition by Carol Zimmermann, CATHOLIC NEWS SERVICE. 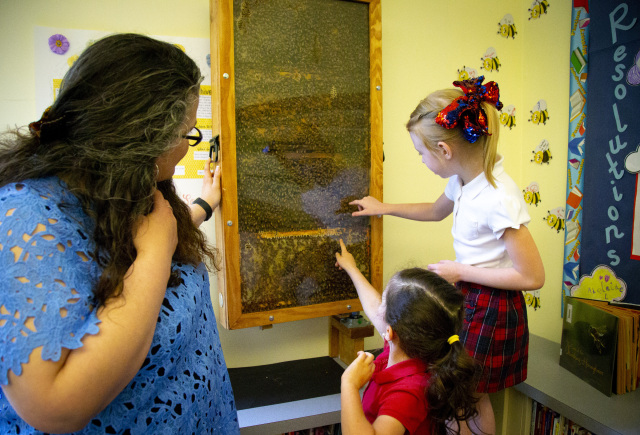 Kindergartners point to honeybees working May 24 in an observational hive located in the library at St. John Fisher School in Portland, Ore. The hive is being used as a tool to teach students to be good stewards of the planet, a Catholic value. (CNS photo/Chaz Muth)

If anyone could rest on their laurels, it’s Catholic schools for all they have accomplished in their U.S. history, educating in the faith and teaching children of all backgrounds in cities and rural areas across the country.

Acknowledging these past achievements alone might not be enough to propel these schools into the future, but it’s an important first step because it recognizes the need to tap into – and promote and market – the spirit of the early Catholic schools and their founders and to adapt that creativity and innovation to today’s world.

The future of Catholic education: It’s bright. It’s bright as long as our Catholic educators, our Church, our leaders, have an open mind and make sure what they do, how they teach and interact with young people is relevant, said Barbara McGraw Edmondson, chief leadership and program officer at the National Catholic Educational Association.

She said it’s also crucial for Catholic schools’ future that educators and Church leaders understand and not shy away from the culture young people live in today.

We need to step right in … and show them the way to navigate a very complex world, she added.

Edmondson said school leaders want Catholic schools to be what Pope Francis has asked of the Church: to be “disciple-making places.” And she hoped they would evangelize in such a way that Catholics and non-Catholics would say: “I want that for my child. I want to be part of that community because I feel a goodness about it.”

No doubt that was part of the intention of the early Catholic schools, to educate, but also educate in the faith, in mission territories and then in cities after the huge influx of Catholic immigrants in the late 19th century.

Catholic schools had plenty of support too. The First Plenary Council of Baltimore in 1852 specifically urged every Catholic parish in the country to establish its own school and these schools, primarily led by women religious, flourished. By 1920, there were 6,551 Catholic elementary schools teaching 1.8 million students and by the mid-1960s – the height of Catholic school enrollment – 4.5 million students attended more than 13,000 schools.

That hardly compares with today’s statistics.

In 2017-2018, 16 new schools opened and 110 consolidated or closed, but those that closed include some that consolidated and re-opened as new entities. NCEA breaks down the closures to a net loss of 66 elementary schools and 11 secondary schools. The report also notes that 1,872 schools have a waiting list for admission.

The trend line does not look good, but recently it’s balanced out, said Peter Litchka, associate education professor and director of the educational leadership program at Loyola University Maryland.

He noted the shift in demographics in recent years, causing Catholic schools to close as families have moved out of cities. But he also pointed out, as many have said before, that at the height of Catholic school enrollment, it didn’t cost as much to attend these schools, because faculty and staff members were often women religious who worked for low salaries.

Now, most, if not all, are lay teachers, he said, noting that tuition reflects current wages and health benefits.

And that, for many, is the bottom line because for many families, it’s just too expensive to send their children to Catholic school.

He also said schools are focusing on promoting what they do day in and day out – being Catholic – which is a drawing point regardless of where people are from and can attract new students.

In response to rising costs, Catholic school leaders emphasize that 29 states and the District of Columbia have some sort of school scholarship program in place – meaning vouchers, tax credits or education savings accounts.

Schools are stepping up to the plate with some innovative fundraising and school tuition models. Dioceses are establishing education endowments and religious orders are supporting schools such as Cristo Rey that offer work study programs to supplement tuition.

One parish in Wisconsin, St. Joseph’s in Hazel Green, tackled the tuition challenge for parents head-on by announcing plans to significantly restructure student tuition this year, essentially making it tuition free, supported 100 percent by the parish.

In an interview this spring with The Visitor, newspaper of the Diocese of St. Cloud, Minnesota, Tom Burnford, NCEA president, said that Catholic schools are the responsibility of the entire Church.

In addition to looking to cut costs, schools are also looking to promote themselves better and to focus on their foundational roots.

Edmondson said every year during the NCEA convention, speakers emphasize: “We stand on shoulders of giants,” referring to the women religious who founded so many Catholic schools.

“And we really do,” she added, noting that it’s crucial for schools to keep the orders’ charisms alive, something many schools are working hard to do – from stressing the school’s history to including those from the order, even aging religious, in school-sponsored events.

Another key aspect to the enrollment factor is the need to include more Latino students.

As Edmondson put it: If we want our schools to flourish, if we want our enrollment to increase and not be on a decline, we have to engage those who are our Church today.

She told CNS it is a commitment of NCEA and other Catholic organizations, universities and dioceses to examine: “How do we find our way and how do we make ourselves the place where Hispanic families say, whatever it is, whatever the hurdles are” they would send their children to Catholic schools.

As someone who attended Catholic schools, sent her children there, taught there and was a Catholic school superintendent, Edmondson said her overall perspective of Catholic education is: “I truly believe in it and I believe it has the ability to make a difference in the world.”

Now as an NCEA official who visits Catholic schools all over the country, she remains convinced “there is something good there.”

As a leader in Catholic education, she added: “I want that goodness to continue to grow.”

Contributing to this story were Chaz Muth in Washington and Mary Uhler in Madison, Wisconsin.