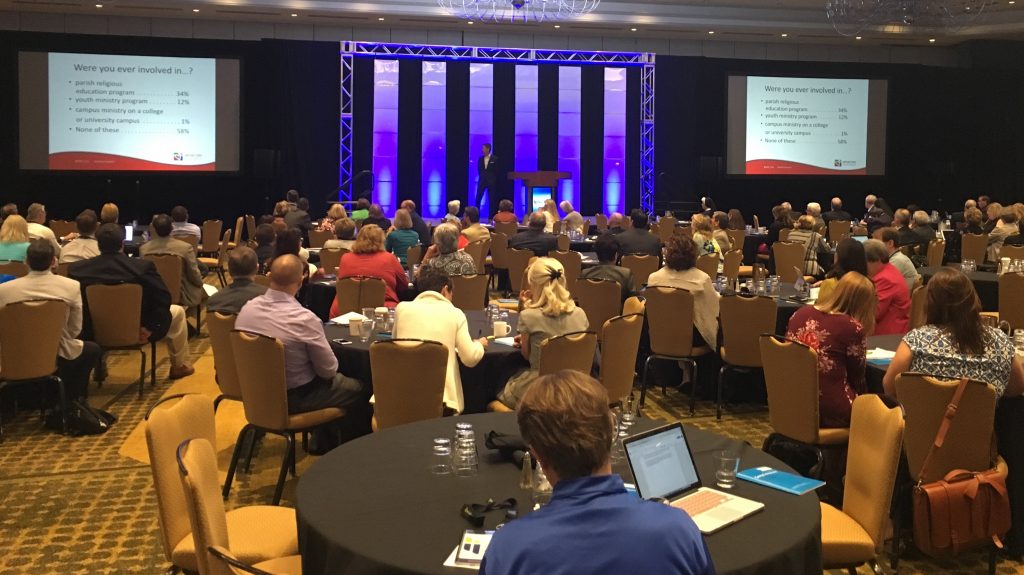 John Vitek, President and CEO of St. Mary’s Press addressed Catholic school superintendents from across the country today at the Catholic Leadership Summit to discuss the research behind Going, Going, Gone: The Dynamics of Disaffiliation in Young Catholics and its implications for Catholic education.

He began the session by asking us to call to mind a person in our lives who has disaffiliated from the Church.  Vitek provided an overview of national research regarding the rapid rise of the “nones,” those who do not identify with any specific religious affiliation.  The focus of Going, Going, Gone is disaffiliation of youth and young adults, but disaffiliation is not a problem exclusive to young people. Vitek points out that parents of the students in Catholic schools are among the first of the generations noting significant shifts in disaffiliation.  The research showed that disaffiliation is occurring across gender and cultural lines.

He shared the story of Beatriz, a young lady who explained how she has felt a greater happiness and freedom since giving up religion, citing that she felt judged at church and couldn’t understand the value of forcing young children to confess minor sins.  Her story epitomized many of the commonalities that surfaced during the qualitative study.

Vitek warned not to try to attribute disaffiliation to a particular cause with a specific solution.  It is a process of unresolved discrepancies happening in multiple forms, accumulating until a breaking point.  Disaffiliation is part of a larger picture than just the Catholic church. Secularization is at the root of many forces contributing to a decline of trust in organizations in general.  While a high percentage of people still report a in a belief in God, affiliation with a religious institution continues to decrease, alongside a declining of confidence in all traditional institutions including business, government, media and leadership.

Vitek drew applause when saying, “The Catholic school system in America is the most important institution to preserve, because of the opportunity it provides to engage with young people.”  Vitek explained the trending concept of what he calls “quasi-religion” where modern movements tend to mimic the ancient human longing for belonging and the sacred, noting The Dinner Party and CrossFit as examples of strong communities that bring people together, provide support and have authentic structure for challenging self to be better while providing accompaniment along the way.

In closing, Vitek advised of three important things we can do to impact the lives of the young people in our Catholic schools:

You can find out more about Going, Going Gone: The Dynamics of Disaffiliation in Young Catholics and the St. Mary’s Press research at catholicresearch.smp.org

This blog was contributed by:

Didn’t have the chance to check in with NCEA Talk each day? We’ve got you covered. Each Friday NCEA Talk will post a roundup of Catholic education news and resources from the week. Fundraiser vs….