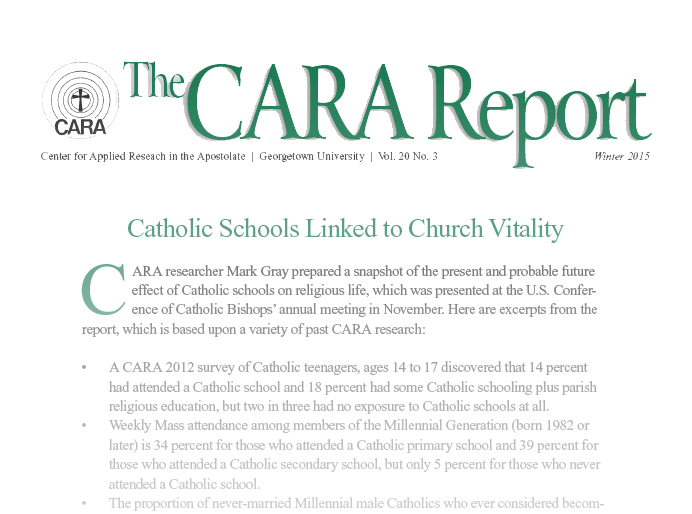 CARA researcher Mark Gray prepared a snapshot of the present and probable future effect of Catholic schools on religious life, which was presented at the U.S. Conference of Catholic Bishops’ annual meeting in November. Here are excerpts from the report, which is based upon a variety of past CARA research:

From the standpoint of religious vocations, the accompanying graphic illustrates the impact of Catholic schools. While only 37 percent of Post-Vatican II Catholics (born 1961–1981) and 23 percent of Millennial Catholics attended a Catholic school, half or more of new priests and brothers attended Catholic primary schools, as did 41 percent of new sisters and 45 percent of young lay ecclesial ministers. 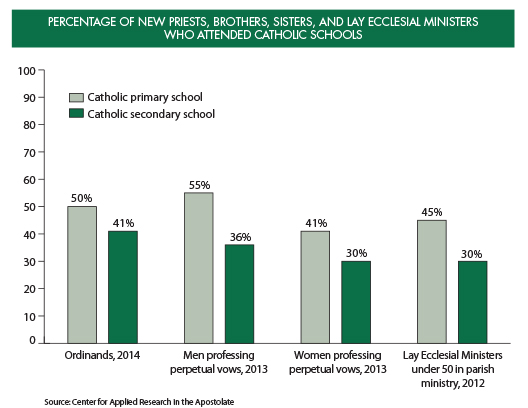 Catholic schools are facing challenges that are both demographic (i.e., fertility and mobility) and economic (i.e., recession, financing, and the impact of tuition costs on parental decisions). Some of the most recent decline in Catholic school students, however, is a function of fewer Catholic children and schools:

The report explains that, “In the last ten years, inflation-adjusted elementary school tuitions have increased by 37 percent and high school tuition by 82 percent.” Thus, “Tuition costs, especially since the Great Recession of 2009, have likely been a substantial important factor in declining enrollments.” The national average Catholics school tuition rates in 2013 were $3,673 at the elementary and $9,622 at the secondary school level.

Hispanic Catholics are much more numerous among Catholics of child-bearing age than older generations. Yet they are disproportionately underserved by Catholic schools. In school year 2013-2014:

For further information on “Catholic Schools in the United States in the 21st Century: Importance in Church Life, Challenges, and Opportunities,” a CARA report for the USCCB Secretariat of Education, June 2014, contact Mark M. Gray at CARA.

This article was originally published in The Cara Report (Vol. 20, No.3 / Winter 2015) by the Center for Applied Research in the Apostolate, Georgetown University. Shared with permission. For more information on CARA, please visit cara.georgetown.edu.