The opening general session at NCEA’s convention always inspires attendees to acquire new knowledge and renew their spirit. This year promises to be no exception. 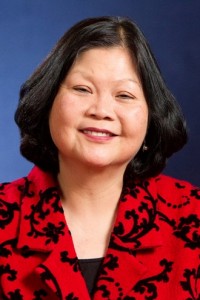 NCEA is pleased to have Dr. Carolyn Y. Woo, President and CEO of Catholic Relief Services as keynote speaker at NCEA15!

Dr. Woo, representing CRS, was featured in Foreign Policy (May/June 2013) as one of the 500 Most Powerful people on the planet and one of only 33 in the category of a “force for good.” Dr. Woo’s Catholic News Service monthly column took first place in the 2013 Catholic Press Association Awards in the category of Best Regular Column — Spiritual Life. Before CRS, she served as the dean of the Mendoza College of Business at the University of Notre Dame from 1997. During Dean Woo’s tenure, the Mendoza College achieved number 1 ranking (BusinessWeek/Bloomberg) in 2010 and 2011. Prior to the University of Notre Dame, Dr. Woo served as Associate Executive Vice President for Academic Affairs at Purdue University.

Dr. Woo will be speaking on the topic of the mission of Catholic schools for the world. She shares, “through the symbiosis of learning and doing, Catholic schools and Catholic social services are partners in the sacred work of forming young adults in faith.”

We look forward to seeing you at NCEA15 – register today!