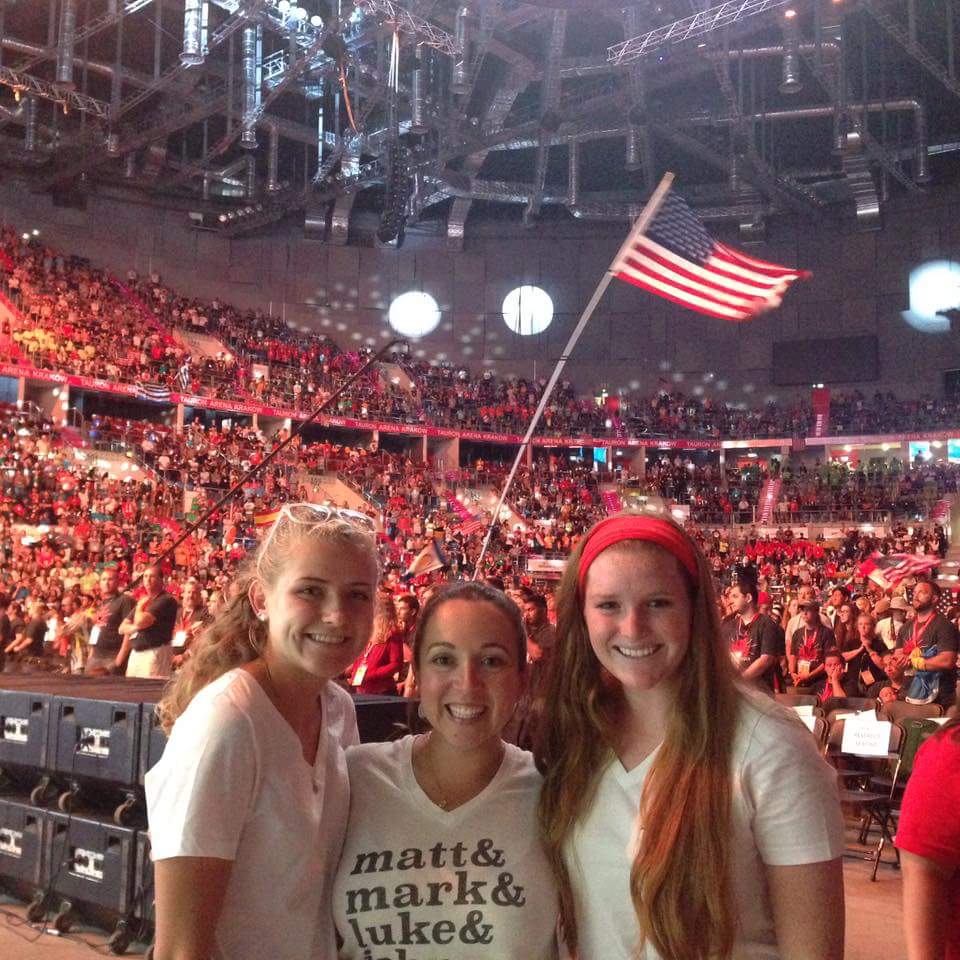 Christine (teacher) in the middle with Nicki (student) on the right, pose for a picture at World Youth Day in Kraków.

World Youth Day is not a trip or vacation, it’s a pilgrimage. Despite endless difficulties trying to get to Krakow, we knew we had to journey on and make it to World Youth Day. The second you enter the city, you are immediately over come by joy. People dancing and singing in the streets, waving hello at every group you pass, asking “Where are you from?” and cheering for their county. I have never chanted “USA!” more in my entire life. When I thought there could be no more joy, I went to an English adoration session where Matt Maher performed with 20,000 people in the audience jamming out, praising Jesus, all of us celebrating our faith. During the service, when they announced the Pope had arrived in Kraków, everyone stood and cheered; just the fact that we knew we were in the same city as him brought so much joy to everyone. Adoration was an amazing experience, being able to worship God on a personal level while being surrounded by others praying. On Thursday, we sat and waited for eight hours just to get a glimpse of the Pope. Waving as he passed by on a public train, the streets exploded with excitement as he was three feet away from me. That night, the streets flooded with people, everyone energized from the arrival of our Holy Father. On the day of the overnight vigil, we made the trek out to the field where we would be sleeping with thousands of other pilgrims like us, waiting to see and hear the words from our Holy Father and celebrate mass the next morning. To be completely honest, trying to corral two million people into designated sections is a lot easier said than done. We pushed through the crowds, though, fought through the heat, and finally, after three hours, made it to our destination. I felt like the Israelites that had been wandering through the desert and finally found Mecca. It was the most satisfying experience, finally being able to set up camp for the night. Then, when the vigil began, I was filled with excitement when the Pope began his speech. We gathered around our “neighbors” radio all listening to the Holy Father’s words. His main message was that there is a lot of fear currently and in the future; but, we can’t be afraid to take risks to change the world. He called us to get off of the coach, and be active members of our faith and all of the endeavors we encounter. He encouraged us to be passionate about everything we do because we hold the joy of Christ in our hearts. He was able to connect extremely well with the youth and call us to action with enthusiasm! Adoration then began and candles were passed around to everyone in the field. The field that night was probably one of the most beautiful things I have ever seen. Every single person holding a candle united in prayer filled my heart. We talked and laughed with the people around us through the night waiting for mass to come in the morning. At mass, the story of Zacchaeus, the tax collector, was read. Zacchaeus was ashamed to meet Jesus. Pope Francis explained about the three obstacles that held Zacchaeus back in wanting to meet and see Jesus: stature, paralysis of shame, and the crowd against him. He connected those three obstacles to the youth and how we are like Zaccheaus in not feeling worthy enough for God. He urged us that we are to not feel ashamed of our sins as Zacchaeus did and to not be afraid to look into the eyes of Jesus.

World Youth Day is an experience I will never forget! I grew bonds with the people I went with that will last a life time and strengthen my faith with God in a way that is indescribable. When I go back home, my goal is to bring back the joy from Poland. Also, I will listen to the words of Papa Francís and no longer be a bystander in my faith.