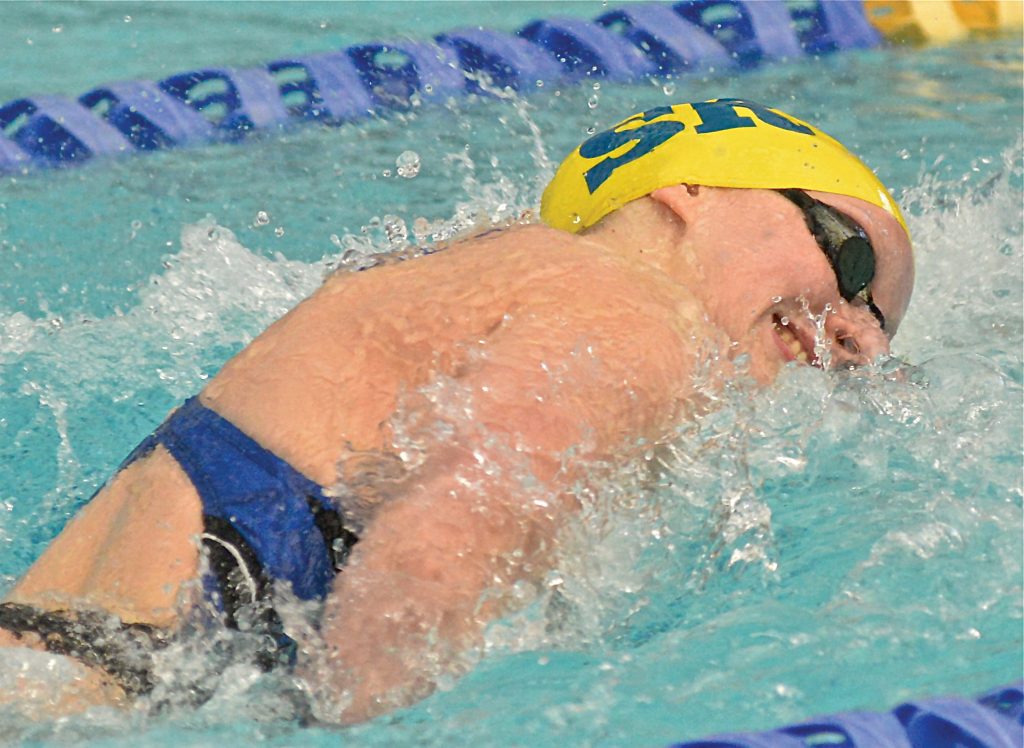 Swimmer Katie Ledecky, shown in her final home meet at Stone Ridge School of the Sacred Heart in January 2015, will be among local Catholics competing in this summer’s Olympic Games in Rio de Janeiro in August. (Photo by Michael Hoyt)

Four years ago, Katie Ledecky burst onto the Olympic stage when she was just 15 years old, winning a gold medal in the women’s 800-meter freestyle. Since then, the swimmer who attended Little Flower School and Stone Ridge School of the Sacred Heart in Bethesda has become the world record holder in the 400, 800 and 1500-meter freestyles, and the American record holder in the 500, 1000 and 1650-yard freestyles. In 2015, she became the first swimmer in history to win the 200, 400, 800, and 1500-meter freestyles in a single world championship. During the Olympic trials, Ledecky qualified to compete in three individual events at the 2016 Summer Olympics in Rio de Janeiro – the 200, 400, and 800-meter freestyles. In the following e-mail interview with the Catholic Standard, Ledecky discusses how her faith is a source of strength and how the communities at home have supported her along the road to her second Olympics.

How has what you learned in Catholic schools helped you in your swimming career?

“I attended Catholic schools from pre-K through high school. I attended Little Flower School in Bethesda through 8th grade and then Stone Ridge School of the Sacred Heart for high school I received an excellent, faith-filled education at both schools. Having the opportunity to attend academically rigorous schools has facilitated my interest in the world and in serving others, and has enriched my life so that it is not solely focused on my swimming and athletics. Nevertheless, going to these schools was important to my swimming – my Catholic schools challenged me, they broadened my perspective and they allowed me to use my mind in ways that take me beyond just thinking about swim practices, swim meets and sports.

“Going to these schools also allowed me to make wonderful friends. Friends, teachers and administrators from my schools have all helped me meet my goals in swimming, and in life generally, by being supportive and caring. The importance of balance in one’s life is a lesson I have learned, and one that I hope will help me in college and beyond.”

How has the support of the Stone Ridge and Little Flower communities helped you during your preparations for the Olympics?

“As I have already mentioned, that support has been invaluable to me in meeting my educational goals, my swimming goals and in preparing for the Rio Olympics. I have friends from high school who always send me messages when I am swimming in international competitions. That support means a lot to me. Mrs. Karrels, Mrs. Mitchell and Mr. McCluskey from Stone Ridge attended Olympic   Trials this year, along with other Stone Ridge families and my own family. It was a lot of fun having them there, and it meant so much to me that they would fly to Omaha to cheer for me. My godfather, Father Jim Shea, S.J., also flew to Omaha (from Charlotte) to support me. Both Sister Rosemaron and Msgr. Vaghi from Little Flower sent me messages when I was in Omaha. My high school swim team coach Bob Walker was in attendance, coaching other athletes, and it was great to know he was there. I feel that I have very special people in my life and, because of that, I feel very fortunate.

“I continue to feel such great support from so many here in the Bethesda/Washington, D.C. area, and I can’t thank the community enough.”

How do you rely on your Catholic faith to sustain you through your training and racing?

“My Catholic faith is very important to me. It always has been and it always will be. It is part of who I am and I feel comfortable practicing my faith. It helps me put things in perspective.”

Do you still say a “Hail Mary” before each race? How did you decide upon the Hail Mary as your go-to prayer?

“I do say a prayer – or two – before any race. The Hail Mary is a beautiful prayer and I find that it calms me.”

How has your perspective on the Olympics changed since last time, now being a graduate of Stone Ridge, headed to Stanford?

“I feel that I have a broader view of the world since the last Olympics. I have traveled more internationally. I have competed in two world championships (in Barcelona, Spain and Kazan, Russia) and in the Pan Pacific Championships in Gold Coast, Australia. It has been fascinating to see other cultures, and to see how sports can serve to link these cultures together, even if just momentarily. An interesting common thread I see is the importance of sports in these cultures, the passion that exists for sports and athletic accomplishment. It is wonderful that sports can have this kind of impact on people, and one can only hope that sports and competition will therefore have a positive impact on how various nations view each other.

“But I also do hope that people in our nation look beyond sports and beyond athletes to find inspiration. For example, our country has such brave, dedicated military and service personnel around the world who put themselves in harm’s way to protect our nation and other nations – these are true heroes. I have gained a great appreciation as to what a remarkable privilege it is to represent the United States in the Olympics. I appreciate the flag being on my cap as I compete. That is a real honor.”

What is going on in your mind and heart as you prepare to head to Rio in a few days?

“First of all, I am organizing everything I need to bring with me to the training camps and then to Rio. So I am busy with that. I am also continuing to train with the same intensity as before the Olympic Trials.

“In my mind and in my heart, I have so much gratitude. I appreciate the many people who have helped me along the way –  especially my family, friends,   teammates, and teachers and administrators from my schools, parish, and teams. I also wish to recognize my club coach, Bruce Gemmell of Nation’s Capital Swim Club, who has worked tirelessly with me over the last four years to make me the competitive swimmer I have become. Besides being a great coach, Bruce is a wonderful person who works hard and always keeps the training fun. I respect him as a person and a coach.”

(The final rounds of the events Katie is participating in will be on Aug. 9 and 12 at 9 p.m ET. They will be streamed online at http://www.nbcolympics.com/. Stone Ridge School of the Sacred Heart will be launching a virtual watch party, which you can follow with #SRcheersLedecky.)