This article was contributed by Anne-Marie Cronin, Director of Marketing and Enrollment Management at St. Mary Nativity School in the Diocese of Joliet, IL.

Students at St. Mary Nativity School in the Diocese of Joliet, IL gathered on Sept. 9 during the National Day of Prayer for Peace and conducted a prayer service. Bishop R. Daniel Conlon called upon parishes and Catholic school children in the diocese to pray for an end to the violence and racial tension in the United States. Two flags were raised. A teacher explained the colors and symbolism of the American flag of the United States, which was then followed by the entire school reciting the Pledge of Allegiance. Another teacher explained the colors of the Vatican flag. This flag is used by Catholics across the world in Catholic establishments, such as churches and schools. It has become part of the identity of the Catholic Church. Petitions were read by students. Father Ron Neitzke, St. Mary Nativity’s pastor, followed up by telling the students how proud he was of them and to be role models for others. This prayer service concluded with singing “God Bless America.” 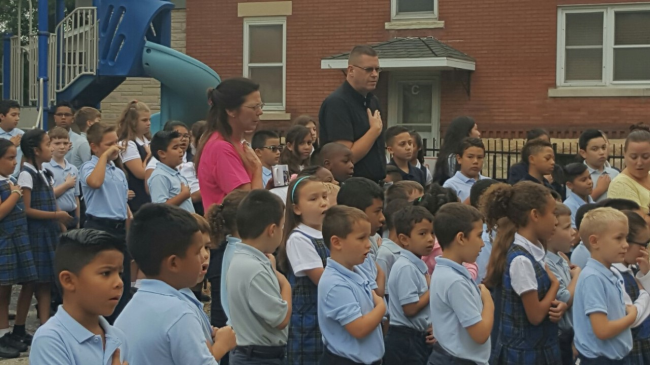 The following post is contributed by Brother Brian M. Walsh, president at Bergen Catholic High School. Br. Brian will be presenting at the Institute of Catholic School Leaders in July. Click here for more information and…