The following article was contributed by Dale McDonald, PBVM, PhD, Director of Public Policy at NCEA. 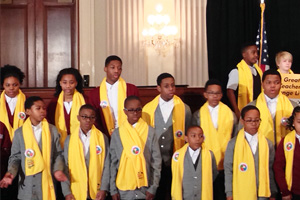 The United States has always extolled itself as a model of diversity and pluralism.  The one exception has been its increasing hostility to private and faith-based education as an alternative to the “common school” – the public school portrayed as the only conveyer of democracy and American ideals.

When this nation was created, the Founding Fathers took deliberate action to create a secular federal government in the milieu of a society of essentially religious people.  Within the specific historical circumstances of that period, the Founders institutionalized a form of governance based on “disestablishment” that would not prefer, discriminate against or oppress any particular religion. This concept was incorporated into the First Amendment to the Constitution, creating a legal framework for protecting religious freedom while distancing the federal government from religious institutions.

As the secular culture changed over the years, the process of defining the degree of separation of the secular from the sectarian in a pluralistic society became problematic and is often characterized by vagueness and inconsistency.  Legal interpretations of the intent of disestablishment have resulted in such a pluralism of religious commitments that has led to the call for privatization of religion and the role of religious institutions in the public square.    Consequently, misunderstandings inevitably arise in any discussion of church-state relations and this particularly true when analyzing the historical interactions of the Catholic Church and federal and local governments regarding the existence and funding of Catholic schools.

The church has always respected parents as the primary educators of their children and supported the decision of the U.S. Supreme Court legitimizing a dual system of education (Pierce v. Society of Sisters, 1925).  Catholic schools provide not only a faith-formation for its students but also provide formation of educated citizens who will contribute to the political, social and economic future of the nation.  As the various members of Catholic school community began to reflect upon this service of Catholic schools to the common good and examined the fiscal costs in providing such public service, they began to challenge the inequities inherent in denial of funding because of educational choices exercised by parents and began to see parental choice as a public policy agenda that needed to be pursued.  As effective public policy, school choice respects and reinforces parental rights to determine the kind of educational opportunities they want for their children.  As effective public policy, school choice places the responsibility on parents to exercise political and economic power to make decisions of behalf of their children and increases the probability that the education system will be more responsive to needs of their children. As effective public policy, school choice demands that the resources required to exercise rights and responsibilities be provided to empower poor parents to access alternatives to failing schools and that will necessarily affect educational and social equality.

Unfortunately, there seems to be a great deal of apathy and/or ignorance among some Catholic school leaders and consumers about the conceptual and practical aspects of parental rights in education as a public policy issue.  Too often, the debate is largely defined and shaped by those who do not have the interests of religious schools as a significant concern.  If the Catholic community is to succeed in furthering  parental choice as the justice issue it is, Catholic educational and church leaders, must become a more articulate and assertive force in shaping both the direction and content of public policy debates that impact the rights of parents to choose the best educational options for their children with the necessary support financial support for those who are poor of modest means.  Going forward, the Catholic community needs to develop an effective public relations campaign to provide accurate information about the contribution of Catholic and other religious and private schools to policy makers, as well as the general public, that will focus the debate on the issue of the value and the need for a dual system of education in our democratic society.

When Pope John Paul II visited the 1987 NCEA convention and proclaimed Catholic schools as “a gift to the Church and gift to the nation,” he reminded all of the assembled educators of the value of the contributions of Catholic schools to both the sacred and the secular aspects of American society.  This is what we have celebrated for the past 45 years in the annual proclamation of Catholic Schools Week – and what we proudly acknowledge in our theme: Catholic Schools: Learn. Serve. Lead. Succeed.