The following article is a re-post of Preserving Catholic school’s charism ‘has to be intentional’ by Katie Rutter, CATHOLIC NEWS SERVICE. 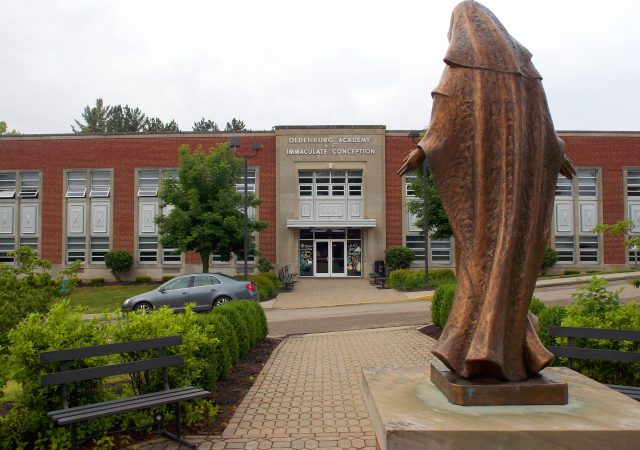 A statue of Mary overlooks the Oldenburg Academy of the Immaculate Conception in Oldenburg, Ind., May 16. On the entryway of the school is written an excerpt from St. Francis of Assisi’s “Canticle of Creatures,” recalling that the school was founded by the Sisters of St. Francis of Oldenburg. (Credit: Katie Rutter/CNS.)

Although women religious – once synonymous with Catholic education – have been disappearing from U.S. classrooms in recent decades, many Catholic schools are taking extra steps to make sure that even as these sisters age or their numbers decrease, the charisms that infused the schools they founded will not be lost.

This was the challenge faced by the Oldenburg Academy of the Immaculate Conception in Oldenburg, Indiana. The school, founded by the Sisters of St. Francis of Oldenburg in 1852, came under laity supervision in 1994 and no longer has any women religious on staff.

Yet their spirit still lives within the walls they established 166 years ago.

“The Franciscan values have helped me to understand my role in this world,” said outgoing senior Rachel Stoll, one of the 200 plus students at the academy. She readily reeled off three of the values held dear to the Oldenburg Franciscans: care of creation, prayer and dignity of the human person.

“One of the unique values that the religious men and women brought to their Catholic schools was a distinct charism in addition to their catechetical formation,” said John Schoenig, senior director of teacher formation and education policy for the University of Notre Dame’s Alliance for Catholic Education.

That notion of charism in the schools eroded as religious vocations declined and Catholic schools were staffed by lay teachers who came from many different universities, worshipped in many different parishes and had many different approaches to education, Schoenig said.

But in recent years Catholic schools nationwide have recognized the need to rediscover the charisms of their founding religious orders.

Barbara McGraw Edmondson, chief leadership and program officer at the National Catholic Educational Association, said this understanding is emphasized each year at annual NCEA conventions when speakers stress: “We stand on shoulders of giants.”

“And we really do,” she added, noting that it’s crucial for schools to keep that alive in any way they can because the founding orders are “such a gift and a legacy of Catholic education.”

At Oldenburg Academy, values of the Franciscan charism are emblazoned on a huge black-and-white mural of smiling women religious that graces the front hallway.

But as this school has discovered, preserving the legacy of its founding order requires a commitment deeper than slogans or photographic displays.

It has to be intentional. It isn’t just going to happen. You have to make a decision to work on it,” said Oldenburg president Diane Laake, who added that the school is “doing a better job at claiming and naming and identifying the charism than we did 30 and 40 years ago.

Now the school has a specific Franciscan curriculum in religion classes and group trips to Assisi, the Italian hometown of St. Francis. A Franciscan value is also chosen each year to define school activities.

“It is truly a Franciscan school,” said Franciscan Sister Marjorie Niemer, who acts as a liaison between the academy and the Sisters of St. Francis of Oldenburg. “We are extremely proud of what the administration and the board of directors has been able to do to promote Catholic education, Franciscan education.”

The school’s Franciscan identity is bolstered by the close proximity of the sisters, since the academy is on the same campus as the Oldenburg motherhouse, where about 120 of the 183 remaining sisters still live. Students frequently pass sisters in the hallway, sometimes lending an arm to help a sister’s unsteady feet.

The students also have the opportunity to “adopt” a sister and eat lunch with her once every two weeks, in a school-sponsored program called “Adopt-a-Sis.”

“I feel like I’m really close to them,” said Nicholas Hoff, an incoming sophomore. “They almost seem like family to me.”

St. Ursula Academy in Cincinnati similarly focuses on promoting the spirit of its founding order, even though only seven sisters remain in the Ursuline Sisters of Cincinnati. The all-girls school preserves its charism by focusing on the spiritual development of the lay faculty.

“I put on a yearly retreat, we run small faith groups for our faculty and staff, we put on board of trustee retreats,” said Liz Curran, coordinator of Ursuline Spirit Initiatives. Hers is a full-time staff position entirely dedicated to preserving the school’s charism.

A small on-site museum contains the history and some mementos of the Ursuline Sisters of Cincinnati as well as the story of the order’s founder, Italian St. Angela Merici. The school’s motto is that each student will be a “thinker, leader, nurturer and prophet” just like the saint.

The order’s founder “challenged herself to be the best she could be; she definitively committed to building a better world,” explained St. Ursula Academy president and alumna Lelia Keefe Kramer.

Another Ursuline-founded school system, Sacred Heart Schools in Louisville, Kentucky, works to keep the school’s charism alive for students of all ages.

Founded in 1859 by the Ursuline Sisters of Louisville, the campus now contains four separate schools that educate preschoolers through high school students.

Seniors at the all-girls high school, Sacred Heart Academy, take a charism course about the history and spirituality of the Ursulines and the preschool students experience this history firsthand by interacting with about 20 of the 61 remaining sisters regularly; exchanging notes, crafts and prayers. A few times each year the sisters travel from their assisted living facility to visit the classrooms.

“We’re very proud of our Ursuline sisters and I think that this keeps that spirit alive,” said Lisa Houghlin, executive director of Sacred Heart Preschool.

“We’ll always find a way to show that connection,” she added.

Contributing to this story were Carol Zimmermann and Chaz Muth in Washington.