The following is a re-post of Disney animator credits Catholic schools with foundation for his success by Joanne Fox. 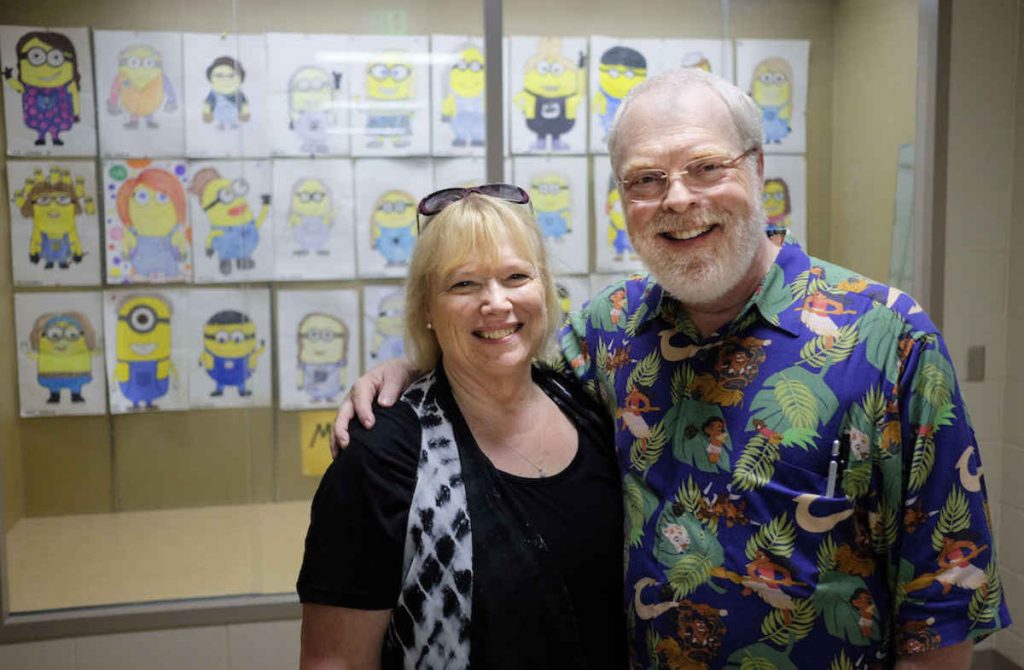 Ron and Tami Clements pose in front of student art work during a tour of Bishop Heelan High School in Sioux City, Iowa. Ron Clements, a 1971 graduate of the school, visited his alma mater Sept. 13 and talked to students about his journey to becoming a Disney animator. He also is a screenwriter and a producer- director and has worked on a number of award-winning Disney films, including the 2017 blockbuster “Moana.” (CNS photo/Jerry L. Mennenga)

Ron Clements is a renowned animator, screenwriter and producer-director of award-winning Disney films, including the 2017 blockbuster “Moana.”

But at heart, he will always be a Midwesterner and grateful for his Catholic education, he told students at his alma mater.

Clements, a 1971 alum of the Bishop Heelan High School in Sioux City, visited with students Sept. 13. He was in Sioux City as a major presenter at the Sioux City International Film Festival, held Sept. 12-16.

As a Crusader, the school’s mascot, Clements was recognized for his artistic talent as the staff cartoonist at the Heelan student newspaper, Heelan Highline.

Journalism teacher Mary Castle, who attended Clements’ video presentation, insisted she knew her student would flourish in his life’s work.

“He was quiet, but clearly had tremendous gifts,” the former instructor, now 91, told The Catholic Globe, Sioux City’s diocesan newspaper. “You could tell the talent was there and I knew that he would be taking one step after another in a successful career.”

At 15, Clements worked at KCAU-TV, Channel 9, the Sioux City ABC affiliate, where another Heelan graduate George Lindblade and Heelan parent Bill Turner — both associated with the station — helped Clements with his journey to Disney.

“I had done some Super 8 films on my own and brought them down to Channel 9 with the idea of maybe we could do some commercials,” Clements said. “And then I asked them if I could use the equipment to do my own film, and they said, ‘Sure!'”

Clements crafted a hand-drawn, 15-minute film in which he did all the aspects, including the voices. “Shades of Sherlock Holmes” caught the attention of folks at Hanna-Barbera, a cartoon producer. That led to where Clements has spent the bulk of his career – at Disney Animation Studios in Los Angeles.

With John Musker, Clements co-directed “Moana,” “The Little Mermaid,” “Aladdin” and “The Princess and the Frog” — all films nominated for Academy Awards. He also helped supervise, animate or write “The Great Mouse Detective,” “Hercules” and “Treasure Planet,” to name a few.

“The films that we make are meant to be films for everybody and they’re films that I think are for all ages and for people everywhere,” he said. “We want those films to resonate.”

In the Kiddie Crusaders Preschool across the street from the high school, Clements waxed nostalgic about taking art classes in the same building more than four decades ago, taught by Sister Mary de Lourdes, a Sister of Christian Charity.

The kids serenaded Clements with the hit song “How Far I’ll Go,” while “Moana” played on a large screen TV. To repay that graciousness, the left-handed animator stood at a white board and drew “Moana” characters Pua the Pig and Hei the Rooster.

“He really hasn’t drawn in years,” confided Tami Clements, his wife of 29 years, who accompanied her husband on the Heelan tour. “He practiced and practiced before we came out here and kept asking me if it was good.”

Clad in an ocean-blue shirt, with “Moana” colorful characters, Clements — with a good growth of facial hair — was clearly out of uniform, but emphasized he never had detention at school.

“I was only called to 318 once,” he said, referring to the infamous dean’s office. “Father Merle Kollasch had a somewhat upsetting caricature of the janitor and wanted to know if I had drawn it. I told him I had not, and really, I had not.”

It was a trip down memory lane for Clements, as he visited the former school, set to be razed sometime in the future, and was in awe at the new $30 million Bishop Heelan High School.

The 65-year-old Clements credited instructors who provided a strong base for his livelihood.

“Mrs. (Helen) Socknat was my English teacher and she let me draw caricatures when we studied ‘Huckleberry Finn’ and ‘A Midsummer’s Night’s Dream,'” he said. “I had Sister de Lourdes for all four years of art and Miss Castle let me be the editorial artist for the student newspaper.”

The education Clements received also was important in his career.

The Catholic faith was clearly a big part of this school,” he said. “Not only that, it is a valuable part of the school and the education it provides.

The film festival presented “Moana” at the Orpheum Theatre in Sioux City, the movie house where 9-year-old Clements first saw “Pinocchio” and fell in love with animation.

“And now, that same theater is showing my movie, Moana,” Clements marveled. “My life has come full circle.”

Joanne Fox is managing editor of The Catholic Globe, newspaper of the Diocese of Sioux City.