The following article is a re-post of Family boasts 22 graduates of Utah Catholic schools by Linda Petersen, Intermountain Catholic. 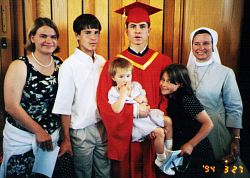 Many high school seniors often feel like they have the weight of the world on their shoulders. While that may not be the case for Juan Diego Catholic High School senior Nathan Rakowski, he definitely has some weight behind him: close to 47 years of family tradition.

That’s because he is the 22nd member of his family to attend either Judge Memorial or Juan Diego Catholic High School. Five other members of his generation have graduated or are expected to graduate from Catholic high schools in other states.

The family name is well-known at Juan Diego, which Nathan likes.

“It makes me feel appreciated, that my name has meaning,” he said.

The family legacy began in 1969 when Catherine and Richard Gourde, parents of 11 children, made it a priority to send them all to Judge Memorial Catholic High School. Daughter Mary was the first to graduate in 1971, followed by eight siblings: Alice, Theresa, Regina, Loretta, Lorraine, Thomas, Paul, Jerry and James. (Brothers Rick and Paul attended Judge but did not graduate).

The elder Gourdes had received Catholic educations growing up in California and North Dakota.

I had excellent teachers, mostly nuns, who were loving and concerned and wanted us to know and live our Catholic faith, Catherine said.

The Gourdes came to Utah when Richard was transferred here by the Department of Defense. At that time Catherine Gourde felt that, being surrounded by so many people of the Mormon faith, it was important for her children get an education in their own religion, so she insisted they attend Catholic schools.

Sending 11 children to private Catholic schools may seem daunting today, but Catherine said back then it wasn’t that hard. Fr. (later Msgr.) Robert Pollock, pastor of St. Olaf Parish from 1955 to 1969, made a deal with his parishioners that if they paid 10 percent of their income to the parish they would not have to pay tuition for their children at St. Olaf School, she said.

That worked well until federal regulations prohibited the practice. Still, even then tuition was low because the nuns taught for free and that kept costs down, Catherine said.

She remembers that when her children went on to Judge, tuition was just $115. Several of the children assisted in the school kitchen to help pay for their tuition, as she did when she was a girl. Then, as her husband’s career improved, so did his income and it became easier, she said.

Her children benefitted greatly from their Catholic education, she said.

“They knew their religion and it was easier to raise them,” she said. “We were trying to raise good Christian people, sons and daughters.”

While not all of her children have stayed close to the Catholic teachings they learned in school, Catherine goes to daily Mass and prays they will come back to the faith, she said.

“They’re good kids with good foundations,” she said. “And they had a better secular education.”

Family members’ memories of their school years are as varied as the individuals themselves.

Tom remembers the football games at Judge. Because Judge did not have its own football field at the time, the team would play on Westminster College’s fields. Tom said he and his buddies would walk down early and play a game of tag football before the main game started. He also remembers freshman initiation, when his older sister Regina, then a senior, took great delight in making him consume sour milk and prune juice.

As with many large families, sometimes teachers confused the siblings. Loretta often was called Theresa, especially by one of the math teachers, Sr. Phyllis Marie.

“I was good at math while Loretta, who was more artistic, was kind of blindsided by it,” Theresa said. “I wonder if that’s why Sr. Phyllis Marie kept calling her Theresa.”

Theresa said she made good friends at Judge, some of whom she is still close to today. She feels the school had excellent teachers, particularly science teachers Fr. Richard McLernan and Fr. Richard Blenner. There also was great school spirit and camaraderie while she was a student, she said.

I told my husband, Mike, when we moved back to Utah that our kids would be going to Catholic schools,” she said. “I wanted to continue to raise them in the faith.

“I liked Judge a lot,” said her sister Mary Gourde Rakowski, who spent a year at the school after Judge and St. Mary of the Wasatch consolidated. “I loved having the chapel inside the school, and the people were very nice.”

She recalled that John Norman, who was ordained a priest in 1979 and is now the pastor of St. Vincent de Paul Parish, was a member of her graduating class. Mary went on to send all of her seven children to Catholic schools.

“In the last 35 years we’ve never had a year when we didn’t have a child in Catholic school,” she said.

Her daughter Alicia Rakowski Florin remembers the unique experience of riding the UTA bus to and from school.

“We were a little community within a community – all these kids in Judge uniforms riding the bus out west,” she said. “We were kids, of course, but we really tried to be mature. … We had a high moral compass for people riding the bus,” she added with a laugh.

She appreciated the opportunity to take classes like yoga and stained glass that might not necessarily have been an option to her in public school, she said.

“I still remember how the teachers took a lot of time and were very passionate and caring,” she said. “They cared about all the students.”

All of Mary’s children were involved in sports during their school years. She insisted on it because she knew for most of them it would be the only opportunity to participate in that way.

“Four years go so dang fast,” she said. “If they want the team experience, they have to do it in high school.”

The sacrifice to put seven children through Catholic school was worth it, Mary said.

Mary’s brother Tom, who moved to California, sent his two children, Alexander and Isabella, to Catholic schools there. The youngest child, James, has his three children enrolled in Catholic schools in Arkansas.

Here in Utah, it’s still too early to know whether Nathan, his siblings and his cousins will continue the family tradition with their own children. For now, Nathan is focused on making memories of his own.