The following article a re-post of St. Francis Xavier School Donates School Supplies To Empower Children Across The Globe by Sara Kraft. 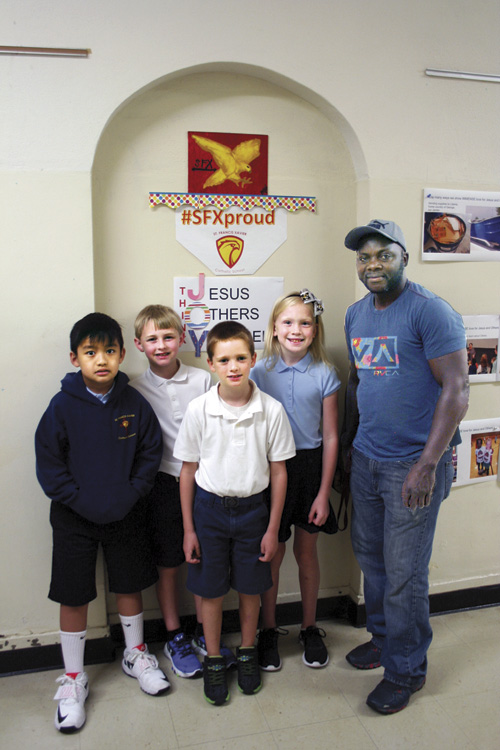 “When I was growing up, my parents struggled to afford school fees and school supplies,” explained George Ballah, janitor at St. Francis Xavier School in St. Joseph since 2016. George is originally from Liberia. “They would buy my brother and I a notebook and pencil to share. My parents cut the pencil in half. One of us would have the eraser and the other one would not.” George noted this half pencil was expected to last half of a school year and so they would be very careful when sharpening it.

George said it is still difficult for people in his home region of Liberia to afford school supplies. Many students walk an hour barefoot to even attend school. If it rains while the students are walking to school, they have wet uniforms and it could ruin their one notebook. Students attempt to use plastic bags or use leaves to try to protect their meager school supplies.

George has been in the United States for 13 years now. “It’s one of my greatest passions to help those back home.” However, George had no way to do so until he started working at St. Francis Xavier School.

George has been in the United States for 13 years now. “It’s one of my greatest passions to help those back home.” However, George had no way to do so until he started working at St. Francis Xavier School.

After meeting George and hearing his stories, students at St. Francis Xavier School decided to help his community. Teachers had noticed that, near the end of the school year, many students simply tossed their unused school supplies with the intention of buying new school supplies for the following year. At the end of the 2017-2018 school year, students were given the option to donate these supplies to George’s village in Liberia.

The St. Francis Xavier Student Council, consisting of 12 student leaders from grades four through eight, spearheaded the campaign to raise funds to ship the collected items. Students raised over $1,200 to assist with this project and others with a month long Read-A-Thon where students received donations based on the number of books or total time read during the 2017-18 school year. Six barrels were sent to Liberia, a distance of more than 5,600 miles. Three and a half barrels were filled with school supplies and books, and the other two and a half contained clothing (including old St. Francis Xavier School uniforms) and shoes. Each barrel cost $600 dollars to ship and the barrels were sent on August 18.

George expects the shipment to take two months to reach his village. The barrels were first taken by pickup truck to a shipment place in Des Moines, Iowa. Once they arrive in Liberia, there will be at least three stops to transport them to their final destination in Sinoe County.

These supplies will last them a long time,” George noted. “It was a huge, huge, help.

I gave them some of my paper and pencils because some of the kids in George’s country don’t have many pencils and much paper,” third grader Sarah Garvey said. “It made me happy and proud to share with them.

“We do many things at St. Francis Xavier School for charity, but this is about helping our neighbors throughout the world in a spirit of social justice,” stated Darin Pollard, principal of St. Francis Xavier School. “Charity meets the needs of a person or persons with immediate assistance of basic needs such as food and clean water. Social justice helps to create a society where people can meet these needs by creating a better ‘environment’ to personally thrive, prosper and benefit in a way that is based on ‘justice for all’ as we say in our own Pledge of Allegiance each day.”

St. Francis Xavier School has also supported schools in other countries. They previously sent school books to the Philippines in order to assist a family member of a St. Francis Xavier parishioner. Additionally, they have sent out of date computers and a sunshine box — a portable solar panel with ten charging ports — to the Democratic Republic of the Congo in Africa. The sunshine box was developed by St. Joseph Bishop LeBlond High School alum Conner Hazelrigg.

“As an educational entity, we know the value of education as the key to helping people change their lives,” continued Pollard. “We teach that not only are we a worldwide Catholic church, but we are called to look out for others who are less fortunate than us, whether they are our neighbors, like at Noyes Home, or children across the globe trying to get an education to make a better community, nation and world.”

George was very, very grateful for the school supplies and knows they will make a difference in his community. He hopes this shipment is just the beginning and his dream is to one day start a library in his capital city.