The following article is a re-post of Coming home: Catholic students find meaning teaching at alma maters by LIVI STANFORD. 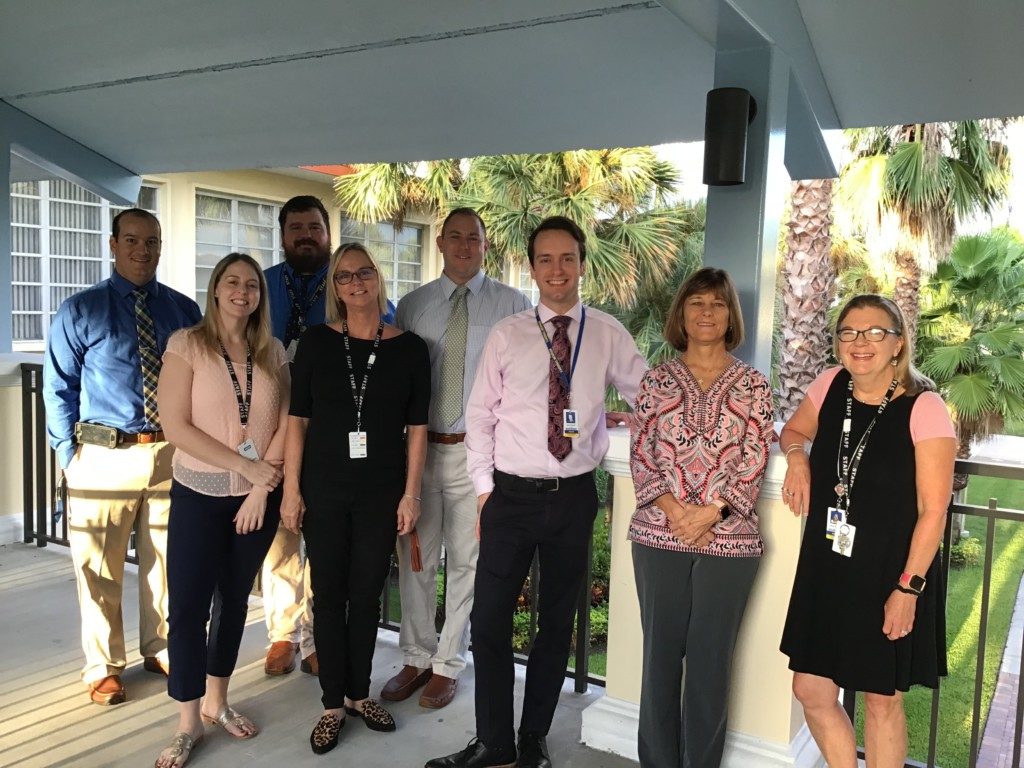 Alumni from Cardinal Newman High School, returning as faculty. Many Catholic school students return to teach at their alma mater – drawn back by the bond of community and religion.

He was navigating his first day of teaching Spanish at Cardinal Newman High School, a Catholic school in West Palm Beach.

Cardinal Newman was no ordinary school. Molina was a student at the school nine years earlier. That spring day, he was overwhelmed and reached out to his mentor and former teacher, Susanne Escalera, for help. Now a fellow colleague, she told him to take several deep breaths and relax. He then could face the classroom.

Those kind words reminded Molina where he had found himself: back at home.

Molina’s story is not uncommon. Many Catholic school students return to teach at the very schools they attended. They are drawn back, in part, by the bond of community and religion. Molina forged relationships at Cardinal Newman that have lasted nearly a decade.

As a student, Molina overcame his hurdles in calculus with the help of a teacher, Christine Higgins, who is now the principal. And when he tore his ACL and dislocated his knee cap in high school football, his coach, Don Dicus, stood by his side, reminding him that no matter how hard it gets, it was essential to go forward.

Now in addition to teaching Spanish, Molina is the football coach at Cardinal Newman, hoping to teach the same values he learned in high school to the next generation of students.

Molina is not alone. James Herzog, who works on education policy for the Florida Conference of Catholic Bishops, visits Catholic schools throughout the state and is constantly meeting teachers who were once students at the schools where they now work. He thinks part of the reason is that these alumni can sense the difference they can make as teachers.

Heather Gossard, senior consultant at the National Catholic Education Association, said while there are no national statistics on the number of students who return to teach at the schools they attended, she estimates that as many as one in 10 Catholic school teachers are themselves graduates.

When they are asked why they return, invariably it is a uniform answer,” said Gossard. “They believe what they were given during their four years of education was so life-altering that they in turn want to give back. It is a force and something that strengthens our school significantly.

At Cardinal Newman alone, there are 10 alumni who returned to the school, where 72 of 481 students take advantage of the Florida Tax Credit Scholarship, which helps low-income and working-class students pay tuition. Step Up For Students, which publishes this blog, administers the scholarships.

Molina said he hopes to give back to his students.

Further, Molina said he appreciates that the school allows him to not only teach a core subject but also the development of the student’s mind, body and spirit.

You have to educate the whole person,” he said. “You can’t just sit there and strictly focus on Spanish.

Although Molina taught at another school in Palm Beach Gardens prior to teaching at Cardinal Newman, he always knew he wanted to return.

A 1998 graduate of Cardinal Newman, Logsdon said Newman always had a special place in his heart: “It is family.”

He referred to his teachers as parental figures. Many members of his family have attended the school.

Currently the dean of students at the school, Logsdon said he appreciated the lessons he learned from his teachers.

The teachers are not there to just teach the subject matter but to help you grow overall and make you a better person,” he said. “You are going to come out of Newman with respect for others.

Jana Schulle, who teaches English at Cardinal Newman and graduated from the school in 1982, said she was inspired to pursue an English degree when one teacher on the yearbook staff encouraged her as a student to enter a writing contest.

At Christ the King Catholic School in Jacksonville, Kristin Kersch also returned to her educational home.

Kersch, who graduated from the middle school in 2003, said she felt compelled to teach in an environment where she could speak freely about her faith.

Like Molina, her boss taught her when she was younger. “She likes to tell the story that she was the first teacher to give me a B,” she said, laughing.

Because she learned so much from the teachers at her school, Kersch said she believes she must live up to that same benchmark in the classroom.

You really feel like you were important and mattered on an individual level,” she said. “I felt like I really have to do a great job for those kids because that is what they did for me.

During the school’s observance of Sept. 11th this year, Kersch said she remembered sitting in the classroom she taught at as a student learning the horrifying news from her teachers. Those memories bring meaning and semblance to her teaching experience.

What brings students back to teach is their connection to one another, said the Rev. David Carr, the president of Cardinal Newman High School. “They say, ‘We are glad to be home,’” said Carr.

The following article was contrbuted by Tom Nagle, Chief Strategist at Growth School Enrollment. Stating the obvious, just as a parish cannot exist without its parishioners, a school cannot exist  without students and supportive families. …