This post was contributed by John Carroll High School students Nick Miller, Kelly Foulk and Kishan Patel via their school newspaper The Patriot. 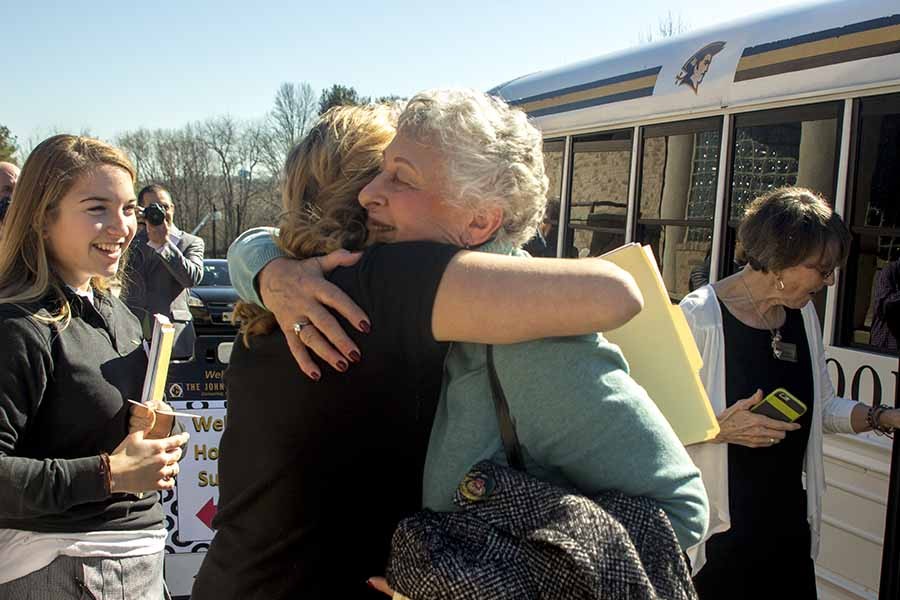 Holocaust Survivor Vera Kestenberg arrives and embraces her guide, senior Madison Hooper. On March 1, 18 speakers came to share stories from the Holocaust and the aftermath of the genocide of six million Jews and five million others. 11 million died in the Holocaust, and 71 years later JC’s Holocaust education program continues to fight to keep their memories alive.

The annual Holocaust remembrance program consists of the Lessons of the Shoah, visits from Holocaust Survivors and the senior class trip to the Holocaust Memorial Museum.

The senior program began in their English classes with the reading of “Night” by Elie Wiesel.  “It was a touching novel about faith and it made me thankful for the life I have been given,” senior Megan Ingold said.

The program for juniors consisted of the Lessons of the Shoah event on Feb. 25. 20 different schools sent students to experience nine different workshops on the Holocaust and hear Sol Goldstein, a concentration camp liberator, tell his first-hand experience with the Holocaust.

Next came the senior class field trip to the Holocaust Museum in Washington, D.C. on Feb. 29.

Upon arriving at the museum, seniors were given the ID of a victim of the Holocaust, containing some basic background information and the victim’s story. Seniors were instructed to keep this person in mind during their museum experience.

The museum’s central exhibit follows the Holocaust in chronological order, starting with the events leading up to the Holocaust and ending with its results. “[It was] impacting. Sometimes when I took a step back from all the information there’d be a really big artifact like a Nazi flag or the Hospital gates that really overwhelmed me,” senior Isabelle Evelyn said.

On March 1, Holocaust survivors and others with second-hand knowledge came and shared their experiences with the Holocaust with the seniors. The day kicked off with a movie showing seniors what a death camp was like. Next, juniors were invited to join the seniors in the auditorium to hear Halina Silber, number 16 on Schindler’s List, tell her story of survival.

The further away we get, the more important it is to have days and experiences like this. Not many speakers are going to be left soon because we are losing them at a rapid rate. And the fear with that is, that these experiences disappear. — Louise Brink Géczy, Project moderator

Seniors were then divided into smaller groups. Each group heard two guest speakers recount their experiences. At the end of the day, seniors returned to the auditorium to listen to Goldstein tell his story for a second time. Not all the guests were first-hand witnesses, however. A significant number of second-generation speakers told their parents’ stories, according to Geczy. The Baltimore Jewish Council encourages survivors’ children to share their parents’ stories, because soon there won’t be any survivors left to tell first-hand accounts.

Senior Project moderator Louise Geczy plans year long for these events. She believes it is critical that students take advantage of this opportunity while they still can. “The further away we get, the more important it is to have days and experiences like this. Not many speakers are going to be left soon because we are losing them at a rapid rate. And the fear with that is, that these experiences disappear,” Geczy said.

Students enjoyed the listening to the speakers as well.  “I thought the day was a good learning experience to see first-hand what the Holocaust did to those who had to live through it. I learned about the resistance fighters who fought back. It was really cool to hear what lengths a fighter had to go to stop the advance of the Nazis,” senior Pat Luft said.

Geczy believes the Holocaust must never be forgotten.

Days like these allow us to be a witness, and it really changes our lives, and allows for us to share [those experiences] with others. I am convinced that it’s people like [our students] that are the ones who are going to make a difference in the world Geczy said.

Nick Miller is the Entertainment Editor, Kelly Foulk is the News Editor and Kishan Patel is the Online Editor for The Patriot.  You can read more about the survivors they met at jcpatriot.com.

To learn more about the power of the reflections of Holocaust Survivors, register for the NCEA hosted Echoes and Reflections Webinar on April 14th https://www.ncea.org/events/echoes-and-reflections-leaders-holocaust-education