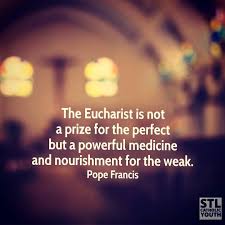 You might have caught the story this week that some Catholics have accused Pope Francis of heresy, mostly centering on the teaching of whether divorced/remarried Catholics can receive Communion.  Pope Francis’s words in Amoris Laetitia have been construed to mean that he is arguing that a divorced/remarried Catholic can receive Communion although no doctrinal changes are forthcoming.  (NCR has a great analysis of this news here).

Partner this story with the New York Times piece on the decline of marriage.  The dividing line between the marriage “have’s” and the “have-nots,” according to the authors, is a bachelor’s degree.

Currently, 26 percent of poor adults, 39 percent of working-class adults and 56 percent of middle- and upper-class adults are married, according to a research brief published…from two think tanks, the American Enterprise Institute and Opportunity America.  In 1970, about 82 percent of adults were married, and in 1990, about two-thirds were, with little difference based on class and education.

In regions where manufacturing and blue-collar jobs have declined, so have marriage rates.  As you can see from the numbers above, the decline has been steep.  Fewer and fewer people are getting married.  In the Church, we have a matrimony crisis because the number of Catholic weddings has declined precipitously along with other sacraments.  This has seemingly raised the anxiety in the church and has inserted marriage into the culture wars.

But listen to Pope Francis in Joy of the Gospel.

The Eucharist, although it is the fullness of sacramental life, is not a prize for the perfect but a powerful medicine and nourishment for the weak.  These convictions have pastoral consequences that we are called to consider with prudence and boldness.  Frequently, we act as arbiters of grace rather than its facilitators. (paragraph 47)

I can see the validity of both arguments.  But if we harken back to Jesus, he was welcoming to all (tax collectors, prostitutes, etc) so I imagine he would come down on the side of Pope Francis.