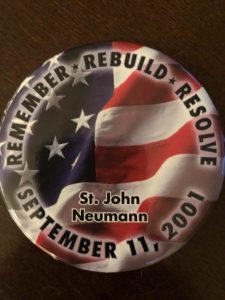 The following article was contributed by Andrea Chavez-Kopp, M.Ed., Assistant Director for Educational and Formation Programs.

I was a young high school teacher at St. John Neumann Catholic High School in Naples, FL on September 11, 2001.   I remember it vividly.  The principal was going door to door and telling teachers to turn on their TV sets…something was happening.  My 11th grade, Honors World History class  had about 15 mins left in the period.  I was one of the teachers that always had a TV cart (a presentation station, as we called them at the time.) The first plane had hit the world trade center and nobody knew what was happening.

There was some muttering and conversation among the teens, speculating about the circumstances, understandably so.  Many jumped up and crowded around the 20 inch TV to see better.  Then the 2nd plane hit.  Yells followed…some of fascination, some of the awe of the explosion, some of fear.

The bell rang…kids were grabbing backpacks and backing out of the door so they didn’t miss anything, while a new group of juniors came in.  Some probably skipped their next class to stay.  I wouldn’t have noticed in that moment.

I will always remember those kids and that moment because we shared it together.  It was the quietest day I ever recall in my teaching career.  Some wept silently as the towers came down.  The teachers devised a makeshift system of keeping track of kids who wanted to watch and those who couldn’t take it anymore.

I kept the kids who watched.

Maybe we shouldn’t have let them watch, but it didn’t seem like an option at the time, to just turn off the TV and go back to business as usual.
I’m sure in the days and weeks following, we did all the things we were supposed to do as a school,  prayer services, donations to first responders…I don’t remember any of it.
I remember being with the kids who watched.
As the story continued to unfold, the media started playing the voicemail messages of loved ones…heartbreaking.
We learned about the heroic and sacrificial efforts of the “Let’s Roll” resistance.
We saw every celebrity you can name come together to pray and raise money for the victims.

These teens and every kid after them, has a different understanding of the world and how to navigate it because of September 11, 2001.

They don’t know a time without metal detectors.
They have never kissed someone goodbye at the gate as they got on an airplane.
Terrorism, weapons of mass destruction and drone strikes became part of their vernacular.
Their reality was altered from that moment on.

Now living just outside Washington, DC, every time I drive past The Pentagon I think about what it must have looked like in flames.   September 11th was such a day of infamy, it is almost hard to comprehend that my children have only a textbook relationship with the event.

As teachers, we have so many things to fit into a day and a year.  I also know what it’s like as a social studies teacher, to feel lucky to get into the 20th century in your scope and sequence.

Some things deserve a moment to stop and reflect though.  If you can, in whatever way is developmentally appropriate for your students, I hope you convey to them the significance of September 11th.  I hope you take a moment to pray for the victims both living and dead of this tragedy and honor the heroes who lost their lives in the rescue.

Your students need your stories and the witness of your prayers, for this day and every day.

School Shootings- What can I do? It happened again, another tragic loss of life, this time in Southern Texas.  We thought we were making progress since the tragedies in Parkland, Florida, as the national conversation…