The following article is  re-post of The Native American Experience in our Catholic Schools by Dr. Tim Uhl. 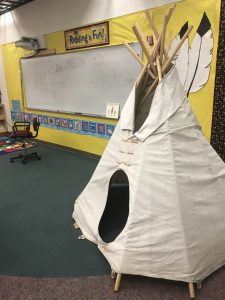 Last week, I toured 8 Native American Catholic schools.  It strikes me as exceptionally appropriate to study these schools in these turbulent times.  First, the number of Indian Catholic schools have plummeted to around 24 from a high of over 100 at one time.  Second, Native American Catholics have suffered from historical marginalization and trauma from the Church itself yet they remain part of the church.  And third, as lay Catholics wonder what we can do to repair our Church, we have a tremendous opportunity to rid ourselves of Indian mascots in our schools.  There are currently 14 Catholic high schools in the US who hold on to Indian mascots.

Notre Dame’s ACE program houses the American Indian Catholic School Network, currently boasting 6 schools and hoping to join with all 24 schools.  The network provides professional development, fellowship, and advocacy for these threatened schools.  The recent Washington Post article highlighted the great work in Indian Catholic schools and a EWTN segment also showcased the great work.  The Catholic World report detailed the resilience of Native American Catholics and Catholic Answers discusses the Church and Native Americans.  NPR highlighted the changes which have taken place in many Indian schools, all of which I saw on display on my tour last week.

But this is not simply another sad story of a disadvantaged group.  The Catholic Church—and Catholic schools in particular—must take ownership of contributing to this situation.  The Native Partnership details this history in devastating detail in American Indian Boarding Schools which describes the “Kill the Indian, Save the Man” philosophy which dominated Indian Board Schools—including, and perhaps especially, Indian Catholic boarding schools.  Native traditions were not simply ignored, they were punished.  Boys’ hair was cut, native languages were prohibited, and native religious ceremonies were outlawed.  NPR had another article in “Native American Boarding Schools Haunt Many” and NCR covered it in “Boarding Schools: A Black Hole of Native American History.”

Fortunately, our Indian Catholic schools have changed.  In Montana, all of our schools embrace their cultural heritage.  All-school Masses include drum groups, smudging, native dress, and prayers in native languages.

An interesting reflection on the reality of how Native Americans are perceived is “Why Tonto Matters” which came out with the movie “Lone Ranger” and examined Johnny Depp’s portrayal of Tonto.  This serves as a transition to an examination of the harmful Indian mascots.  Despite the change of many schools and teams away from Indian mascots detailed here, these mascots persist on the professional, university, and high school level.  The following articles are meant to give context to the argument against their use.  It’s not simply a question of political correctness, it’s a matter of the group in power (namely, whites) ignoring the reality of the past in the interest of their own fanatical support of their favorite teams.

I know it’s not realistic to think that you will read all of the above articles.  But I hope you’ll read a few to broaden your perspective.  Also, there might be a school or two out there with leaders, teachers, or parents who have always been bothered by the names and are looking for ways to bring about recognition of the injustice.  Perhaps we’ve reached a tipping point and those 14 schools will need to change.  And maybe we can make headway to get the Redskins, Chiefs, Braves, and Indians out of the professional sports ranks.

As a closing note, I encourage you to find time to watch this video which might change your perspective of Native Americans.