The following article is a re-post of Enrollment in Stark County Catholic schools rises, bucking trends by Kelli Weir. 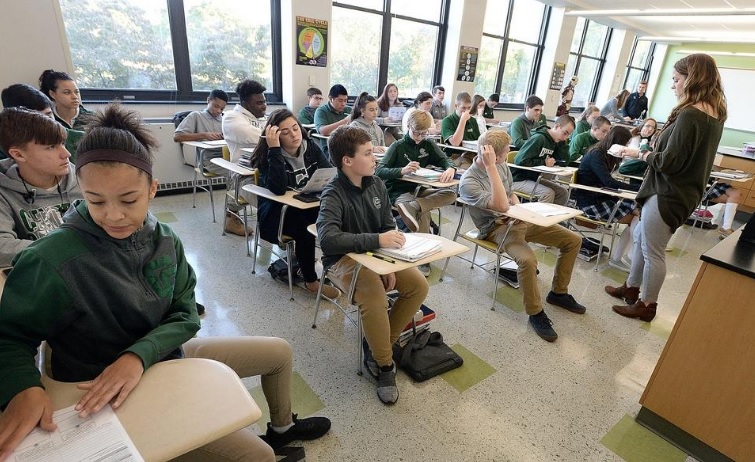 Stark County Catholic Schools has bucked the nationwide downward trend for Catholic school enrollment by increasing its enrollment by 118 students this school year.

Heidi Kaczynski surprised her parents when she told them she wanted to attend St. Thomas Aquinas as a freshman.

She had attended public schools from kindergarten through eighth grade, performing well in her studies, particularly, math at Glenwood Intermediate as well as loving the art opportunities the Plain Local School District gave her.

“She did well at Plain Local but she was willing to give up the arts to be a part of something bigger,” explained Heidi’s mother, Amy Kaczynski.

Amy said Heidi didn’t want to be typecast into a particular career path or social group. She wanted to stay involved with multiple activities, which she said can be more difficult in a large school such as GlenOak High School. Amy believes Heidi also saw how her brother, Max Kaczynski, adjusted to going to a Catholic school. Max, now a junior, enrolled at Aquinas as a freshman.

She saw her brother blossom and get involved in lots of different things that he didn’t have the opportunity to do at GlenOak, Amy said.

Amy said while the family needed to make some financial adjustments to support the tuition for both children to attend Aquinas, she and husband, Frank, support the children’s decision because they consider the schools an extension of their close-knit family.

“It reminds me when they were in grade school with the small-group setting and you knew the parents really well and knew the students really well,” she said. ”(In most public schools), once you get into the intermediate grades and middle school you begin to lose that, and especially at GlenOak where it so large.”

The Kaczynski family is one of the reasons why Stark County Catholic Schools, which includes 11 elementary schools, a middle school as well as Aquinas and Central Catholic, has bucked the nationwide downward trend in enrollment for Catholic schools even as Stark County’s school-age population continues to decline.

For the first time in at least five years, enrollment in Stark County’s Catholic schools is up, with 114 more students enrolled from kindergarten to high school compared to the previous year.

Aquinas saw the largest spike among Stark County Catholic schools with an increase of 50 students in its middle school and high school. Central Catholic’s enrollment also increased – for only the second time since 1998 – with 20 additional pupils this year and the elementary schools gained 40 students, with St. Michael seeing the largest increase among the 11 schools.

Catholic school enrollment across the nation has been on the decline for more than two decades,” Stark County Catholic Schools President Dan Gravo said. “Stark County experienced a similar trend. We’re thrilled that we are now a beacon of success and a testament that the president-principal model can work with a great team of people, like the one we have here in Stark County.

Mary Fiala of the Diocese of Youngstown said Stark County’s growth represents the largest increase in enrollment among all 28 schools under the diocese’s umbrella, which serves 6,801 student in Stark, Mahoning, Trumbull, Ashtabula, Portage and Columbiana counties.

Gravo, whose role is to focus on marketing, enrollment and development, believes the increased enrollment at the high schools stems from better marketing of the schools and creating a better connection between the elementary, middle and high schools to retain students.

Aquinas and Central Catholic have begun to offer elementary school partner nights at their high school sporting events, where younger students can attend games free of charge, have the opportunity to be recognized on the field or court and can participate in activities led by older students, such as the annual Central Catholic vs. St. Thomas Aquinas Rivalry Football Game Elementary Student Tailgate.

For us, it was a pre-K through 8 strategy, not just recruiting the eighth-graders,” Gravo said. “We’re looking long term so that they are thinking Central and St. Thomas from the time they are a little kids. … Just like you would in any public school system. If you’re a Little Leopard, you’re going to Louisville High School. Same at GlenOak with Little Eagles. We want to have that same setup, too.

Gravo said while some families such as Kaczynskis chose to leave public schools to join the Catholic high schools, most of the increase in their enrollment came from families whose children were enrolled in Catholic schools during their primary years. Gravo estimated 80 percent of this year’s freshman class came from the Catholic elementary schools.

Ella Salvino and Camryn Oster were among those freshmen who attended Catholic elementary schools. Salvino is attending Central Catholic and Oster enrolled at St. Thomas Aquinas. Their parents each cited the small classroom sizes, the schools’ commitment to faith and their attention to academics as driving factors in their decisions.

Kerri Salvino said she wasn’t surprised to learn about the 12 percent enrollment increase at the high schools because she’s seen the extra effort the staffs have put in to market the schools.

Catholic education used to be that you didn’t have to advertise because Catholic families automatically sent their children to Catholic schools,” said Salvino, a 1990 Central Catholic graduate. “But now with the cost of tuition and good public school options, that’s not necessarily the case so they have to advertise. People don’t realize how much scholarship money they can get.